It’s raining and snowing and all around us so it’s pretty cold. Franck and Lena are tired so I’m going with Franck for a short walk around the lake Badech. In the meantime weather gets better. Franck gives us some tips of places to visit in Spain and then has to go. Thank you one more time for everything Franck! In the evening we go to scout out the village Bagnères de Luchon and that’s it for today.

Day 33 starts with bathing in the river. Don’t get it wrong it’s not just a river. It’s fokin cold river. I just dipped and already couldn’t feel my feet. But anyway it was really nice to feel clean and alive again. Then we prepared everything on the drive, went to buy some bread, local pastry and were ready to finally, finally drive to Spain. It’s “goal” of our journey and it took us just a month to get there. LoL First stop is small city Aínsa where we’re scouting everything from food to city itself. Next spot is lake Pantano de Mediano which was made by building damp nearby. That’s why you can still see tower of church in the middle of it. We went to check small islands and it was really awesome experience to walk forever in the water which wasn’t higher than your waist, see old buildings under the water and just chill around. When we wanted to setup slack line between 2 islands weather went nuts. Wind made waves, brought dark clouds and our slack line was missing 3m to be able to make it. Bummer.

First proper stop is village Rodellar at national park La Sierra de Guara. It’s literally breathtaking place full of canyons, rock, climbing spots and it’s worldwide famous for it’s hard routes with symbolic “dolphine” spot. First day we’re just walking around, getting the local atmosphere and bathing in the river. There is nice rock to jump into the river so we did some flips until Lena lost her ear plugs. Mission find plug in crystal clear water could begin. Lena found it, Lena lost Rock, Paper, Scissors and so Lena dived for it. Mission successful.

Bang bang bang. Morning starts with crazy knocking on Gordi. It’s rangers. For 2 nights we’re parking in the national park by the road with 4 other cars. They’re taking pictures of our passports and telling us to use official parking lot… Busted. It’s first time since we started this trip that anyone would have problem with us parking somewhere and I must say that it was sometimes pretty sketchy places to park at. So I’m quite happy even tho this wasn’t the nicest experience. Yesterday we were super motivated to go climbing but morning is pretty lazy because it’s raining a bit and it just doesn’t seems like we can. So I’m deciding to make a hike to village Otín where you go trough canyons and also can visit little home of cave people “Dolmen de Losa Mora” which was cool but I was expecting something much bigger.Local atmosphere is really really awesome. After coming back I’m finding Lena chilling by Gordi and there is no motivation to go climbing at all. We found different motivation tho. Dreadlocks. So I have 7 of them now. (Only 3 of them survived til now. RIP) By the end of the day we’re moving to the other side of national park and rather sleep by the village out of the rangers territory.

We must go climbing today! Lena is waking me up earlier than usually and she’s pretty horny to go climbing! We go to the closest lake (Embalse de Vadiello) where app showed us climbing location. This part of national park looks like a moon. Amazing place to be! We have no idea where it is because we have no internet now. So we’re packing gear and going to check one possible side of 2. We hike and hike and hike and nothing climbable is around us until we’re on top of the mountain. There are some trail runners coming who are telling us that climbing spots are only down by the road and they’re asking if we came to do canyoning. (Of course we did. :D)… Shit. View is really amazing but now we must go down. It’s getting stormy and my backpack is really heavy. On the way back we finally get some reception so we can see where is that climbing spot just to find out that it’s on completely differend place literally by the road. We drove there, chilled a bit in Gordi. It’s just hard routes here so we take it nice and easy. After session we’re dipping into the lake and completely tired leaving this national park for good. It was a pleasure.

Next kind of a world to explore is desert. We’re sleeping in desert like place and going to check national park Bardenas Reales with crazy shaped hills and eroded rocks. It’s actually pretty hot day and I’m already tired. Plan is some hiking but in the end we found out that it’s not good idea in this national park. It’s all done by car or bike in here so we set up fo “basic tourist” mode and drove everything. It was beautiful anyway. Hot, hard and dusty yet beautiful. Crazy part about this national park is that in the middle is training ground for soldiers which were flying and shooting from the helicopter while we were trying to enjoy nature.

We’re out of cooking gas. That’s not nice but at least we have small stove and cartridge for my outdoor cooking so we won’t die. Problem is that we have/want 5kg bomb and everywhere they’re selling only 20kg bombs which is too big for us. Let’s see what we can do about it. (Nothing. Actually the one we wanted didn’t have even in Germany so it was much bigger strugle than we expected and cooked on small stove until end of our trip.) We’re heading to San Sebastián but there is this climbing place by small village Hermani so we sleep there. Climbing is really nice.

Lena has to work and I’m waking up with pretty shitty mood. I hate myself a lot. I decided to go for a hike so I’m not just stuck with my thoughts. We’re parking on a part of “Camino de Santiago” so I decided to follow it for a while. After getting to next city I’ve seen that they have marked trails and one circle route is 20km. That’s perfect for me. If I could just keep my course. I didn’t make even 2km and I already got lost. I was supposed to be following mark. Nothing more, nothing less. I hate myself even more and continue to follow way where I think I should go and connect later. Thanks to trusting my phone which was showing north, where north wasn’t at all, I just made huge circle along few crests and ended up not even 2km away from place I’ve started. I hate myself so much right now. My next decision was to walk into city which is in the halfway of original plan but the only road leading there is a highway so I can’t walk there. I decided to get there anyway and walk in a straight line. After a while I found hiking random hiking path. After following it for a while I found myself to be watching city where I wanted to go. But there is huge stone mine and river between me and city. FML. While hiking around the mine I’ve ended up on top of the mountain where original route leads too. Time to go back. I actually managed to stay on it (ok I got lost a little twice) until I found Gordi again. I hate myself anyway.

I came when Lena was finishing her work and we wanted to go climbing. While trying first route we got into bad vibe and fight. After a while we rather refilled our water and moved to San Sebastián. The place to sleep, Lena found, was breathtaking. That’s why there was quite lot of people and to not have it too easy we got stuck in the mud. Can it get even worse? Let’s go sleep and hope for better tomorrow.

It’s raining. Mood is not much better but I’m googling where it is climbable around so I can scout it out. Climbing spot at enter of Pasaia bay looks magnificent. It’s sandstone with big circle holes exactly like Emmentaler cheese. We have to check it. Then I continue along the coast but can’t see much because I’m literally walking in cloud. = rain and fog. It reminds me so much of England. On the way back I couldn’t get to Gordi because of this gang. That’s it that’s all for today I’m so wet. 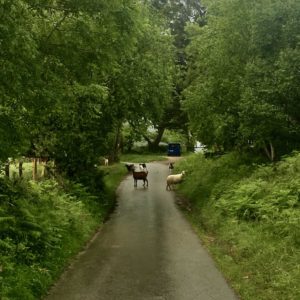 It’s Sunday, sunny and Lena is finally free. My mood is finally good too. Our plan is just climb and swim. We’re so tired and lazy that we’re getting out of the bus at noon and that’s heroic performance. After tough time searching parking spot for Gordie we can finally begin our today’s adventure. As I said that climbing spot is gorgeous. It’s first time for us to be climbing on sandstone and we both really enjoyed it. Routes looked hard for me at beginning but in the end it wasn’t and I was happy for it because I’m still getting used to my new climbing shoes. After climbing we happily jumped into water not giving any fucks that half of the city was watching us. It was great feeling to be finally clean again and best way how to end up day. (Just joking ice-cream afterwards was on same level of joy. Hihi) 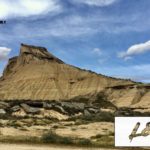